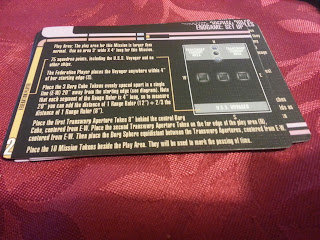 Today I played through the Voyager solo mission "Endgame".
In this Solo player mission the federation player gets 75 points, they may only have one ship, and that ship must be Voyager.
The Borg gets 3 cubes and a sphere.
This mission is played on an 4 by 3 table. It is an odd sized table so I ended up using 2 Gale force Nine Game mats to create my playing space. 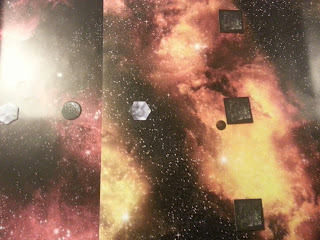 The storyline for this mission is that Janeway has come back in time to save Voyager. She convinces them to fly through Borg space to use a new Transwarp Conduit that leads back to the Alpha Quadrant.  She also brought back some weapons and hull upgrades that are used in this mission. The story progress and the current Janeway has a moral dilemma, she can use the Conduit to get home or destroy it to prevent the borg using it in the future.
In game terms this means there are two victory conditions, a minor one where you return home via the conduits or a full win if you destroyed the conduits. 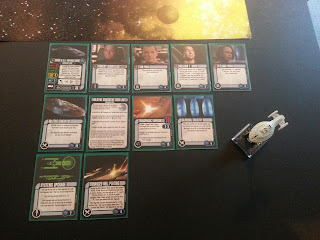 The Borg win if you hit turn ten and have not completed any goal or if you simply
get killed on the way.
My ship build:
For this mission I want to be very defensive.
For my Captain I took Robert Desoto. He gives me re-rolls for defence.
For Crew I took Tom Paris (+1 Defence), William T. Riker (also gives me +1 Defence and allows me to swap a Battle stations for an evade.) and B'elanna Torres for more upgrade slots. 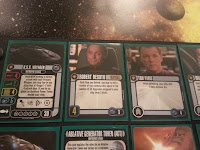 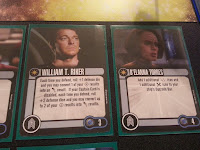 Ablative Generator and Transphasic Torpedoes are not required for the mission but get massive bonus if you take them. Ablative Generator soaks up 12 damage instead of 5 and is key part of not losing the game early. Transphasic Torpedoes gain five uses instead of one, it also goes through the shields of Borg Cubes and the Transwarp Conduits. Next I add Bio-Neural and it takes up my last Tec slot leaving me only with a weapon slot thanks to Torres, 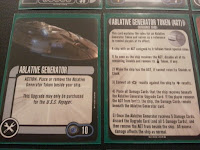 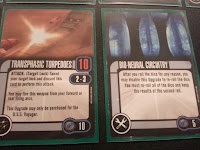 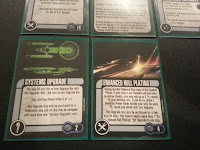 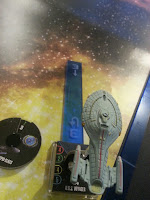 Turn one.
I started off in the corner to avoid being hit by two cubes, I move 3 forward and target locked the closes cube.
The cube fired first, scoring 3 hits and 2 Criticals
I rolled five defence dice, got 2 Evades, 2 battle stations and a blank. I re-rolled one Blank and one battle stations using my commander, rolled another battle stations and an evade. I used Riker to convert one battle stations to an evade for a total of 4 evades. In the end I took one hit to my shields. I then fired back with my normal weapons forgetting that my torpedoes ignored shields, my shot failed to hit and i decided to save my Target lock for next turn. 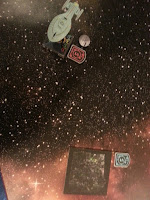 Turn 2
I made a one right bank, I activated my Ablative Generator so that in my next turn I would be immune to the Borg cube's Tractor Beam.
The borg ship attacked, scouring 4 hits and 2 critical hits.
I rolled my defence and after using all my abilities I scored 3 evades and took 3 damage.
I attacked back this time remembering my Torpedoes. I scored 3 hits and 2 critical hits, the borg took 7 damage not bad. 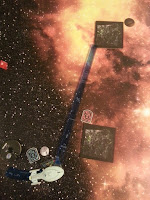 Turn 3
I made another mistake and took a 1 bank left, this put me really close to the Borg cube. In the rules if you pass through the cube or land on it you lose. I had to kill this thing this turn. I took a target lock as my action.
This time two borg cubes were in range of me. The center one attacked scoring 6 hits. I rolled my dice and scored 5 blanks! I used my Bio-Neural Circuitry and scored 4 evades, only taking 2 damage.
The second cube fired, this one was at close range so it got 11 attack dice, it only rolled 2 hits and 2 critical hits.  I rolled my defence and using my crew upgrades i was able to get 4 Evades.
I fired my Torpedos at the closes cube and destroyed it doing a total of 8 damage. 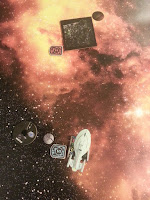 Turn 4
I did a 1 bank to the left moving on to the next cube, then I target locking it.
The cube fired scoring 4 hits. I rolled my dodges and used my crew to get three evades, I then used my Enhanced Hull Plating to cancel the last point of damage.
I attacked back scoring only 3 hits, yikes! only 2 torpedos left!
I also now had an auxiliary power token thanks to Enhanced Hull plating, I figured its better to use it now so that i didn't lose my Ablative Generator. Once you lose the Ablative Generator any tractor beam action means I lose  the mission, so I have to negate as much damage as i can to keep the Ablative Generator active. 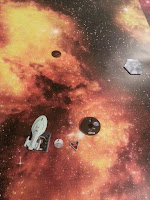 Turn 5
This turn I did a simple 1 forward, to get rid of the Auxiliary power token, I then Target locked the cube.
The cube fired, scoring 3 hits and 2 criticals. I rolled my evade dice only scoring 2 evades in the end and taking 3 damage bringing me up to one lost shield, and 8 damage on my Ablative Generator card.
I fired back scoring 6 hits and 2 criticals for a total of 10 damage! That's another dead Cube.
Turn Six
I moved into position to go through the gate, and re-enabled my Bio-Neural Circuitry. 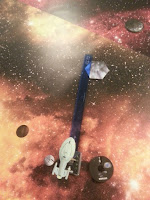 Turn Seven,
I decided I wanted my Voyager to get home, so I need to go through the conduits. To do that I had to go through the lower conduit to that part of the table, if I missed I would lose the game, So I choose to do a speed six, I was pretty sure I was lined up, and luckily for me I was right.
I moved though it, though I was hoping to land on it, if you were on the token you cannot be attacked by the sphere.
The Sphere attacked, scoring 4 hits. I rolled my defence dice and scored 3 dodges. Voyager takes another damage.
I attacked back using Voyagers ability to fire out of arch scoring 3 damage to the sphere's shields and gaining me a Auxiliary power token. 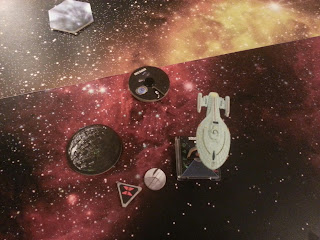 Turn Eight
I took a three bank right maneuver bringing me closer to my end goal, the second Conduit marker, if I land on it I win the game. Being at range one of the sphere means if it scores 3 hits this turn I will lose my Ablative Generator and in the next turn the sphere tractor beam will cause me to lose the game.
The Sphere attacked and scored 3 hits and 2 Criticals! I roll my dice, I roll one evade and three blanks. I use my captain to re-roll 3 of the dice and gain 1 more evade and a battle stations, I then used Riker to change the battle stations to an evade, only taking 2 damage. Few! 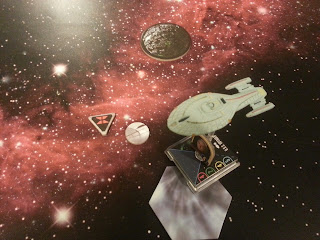 Turn Nine
Well I am tractor beamed this turn so I can only make range 1 moves, but that is enough to get me on the conduit and win the game!

Next time I will go for a major victory!

I really like my build for this mission, I ended up using all my cards, and each one did its part to win me the game.
Posted by Unknown at 4:23 AM