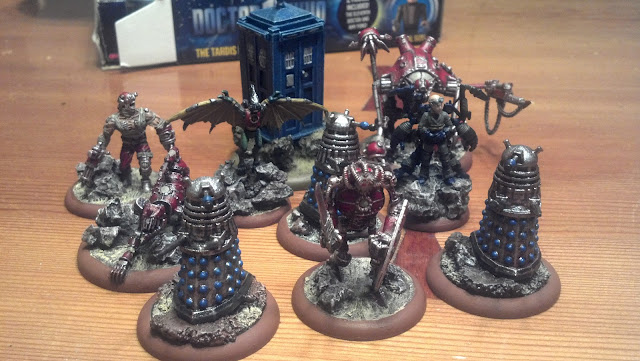 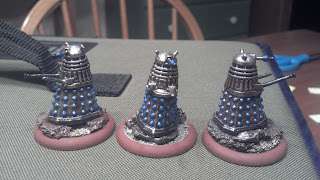 These dalaks are shapeways 3d printed 32mm daleks that fit into my Malraux sized range. I am currently using them as Wardens. Since I bought these models shapeways have come out with other dalek war themed models, including an empire dalek based of the new series. But for now I am happy with my three dalek wardens.  http://www.shapeways.com/ 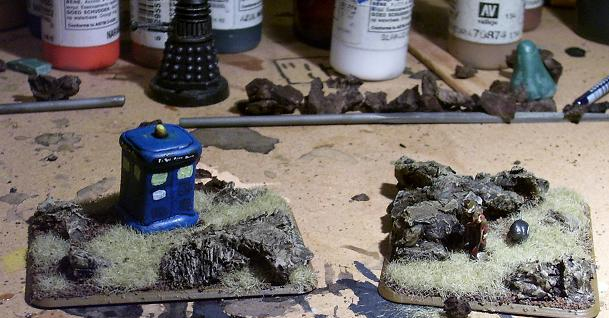 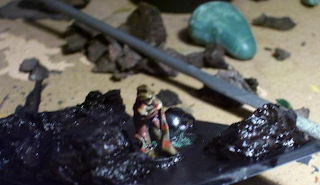 My flames of war friends will see me use my doctor who objective from time to time. I had a lot of fun making these objective markers, the tardis is made out of green stuff, the Doctor is a bailed out American crew member, the one nursing its right arm. After green stuffing a scarf and jacket my 4th doctor turned out quite well and was a lot easier to make then it looks, the hat is simply the helmet that was clipped to the right size. Well not something I bought but at 15mm I would encourage you to play around with greenstuff. My tardis is from the black tree design miniatures, They have a lot of classic doctor who miniatures done in a scale that lines up mostly with 40k.  There line of models is massive and you can find just what your looking for, classic doctor who wise.
http://www.blacktreedesign.com/northamerica/home.php?cat=2297

Next on my painting table is a model form the Heresy miniatures line of doctor who models, the 10th doctor. I just finished basing him so here is a photo from there website of the awesomeness. 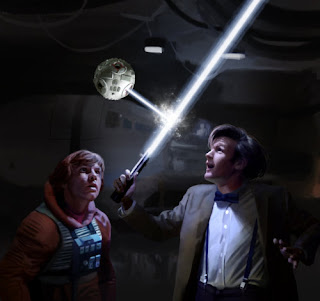 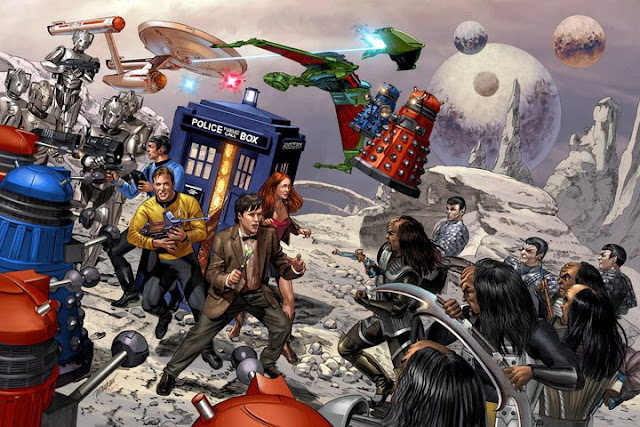 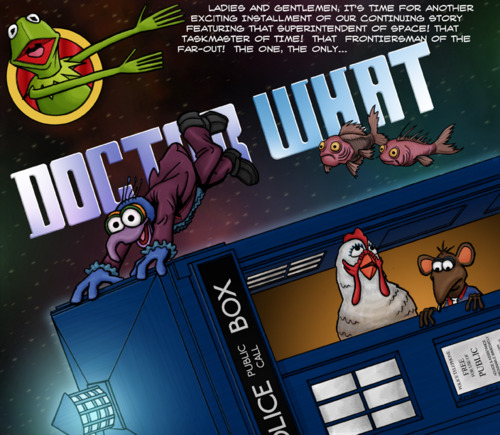 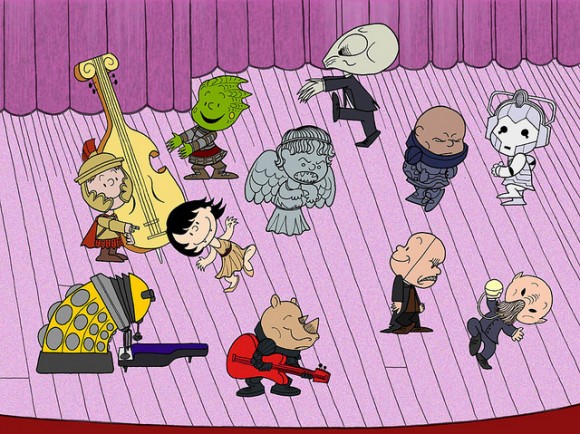 Posted by Unknown at 2:37 PM No comments:

Email ThisBlogThis!Share to TwitterShare to FacebookShare to Pinterest
Labels: Awesomeness, Doctor who

X-Wing vs Tie Fighter, Basic review of the game

One the the newer cool games I picked up this year Is X wing, though this game really takes me back to a younger me, playing the old computer game with the same name. X-wing feels like a mix of Wings of War and the Pirates of the Spanish Main. 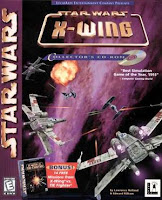 The game is a fast pace game, where you take on the role of a commander of a squadron of ships to battle in space. The Rebels have to deal with being out numbered in most of there games, so they end up relying on upgrade cards and there pilot combos to make up the difference. The Empire has the numbers, they out number the rebels 2 to 1 or even 3 to 1 in most games. Most of the empire ships don't have shields and will not be able to take as meany hits as there rebel friends but they will have more attack dice per side then the rebel side making up for there low survive-ability rate. 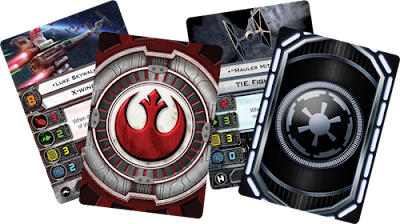 The game itself is played with cards, miniatures, measuring sticks and dice. Each side starts the game off by picking what ships they will take by sorting though there ship cards and reaching a preset point limit. At the same time both sides will look at upgrade cards as well and choose what upgrades they think they will use in the battle. Once both sides have played a few games the Rebel player will notice that his upgrade cards are key to evening the odds, most notably his astromech droids are key one can even repair a ship to full health during a game. 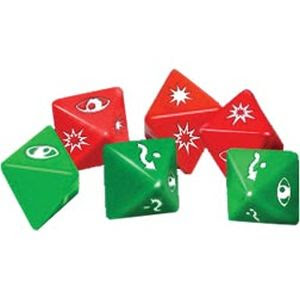 The Dice in the game are unique and you want to have at lest 4 of each, so buying the dice pack is something you will want to do right away. On the red combat dice you have 4 results, the solid star is a normal hit and will score you 1 point of damage, the hollow star is a critical hit it two score you 1 point of damage and also allows that damage card to have added effects. They eye result is on both dice, this does nothing unless your pilot took the focus action and gained a focus point, this point can be spent when ether attacking or defending to change all the eyes into the normal hit or dodge result depending on what type of dice your rolling. The blanks on both dice are failures. On the green dice the arrow result is an evade result. When attacking the attacker rolls a set amount of dice depending on his/her attack value and the defender rolls its defense dice according to its defense rating.  For every evade the defender gets that player negates one of the attackers hits. I like games that let you defend yourself and this game dose that well.

For movement in X-Wing you have movement dials for each ship.Each dial has a movements that lines up with one of the movement sticks from the starter boxset. The players sets there dials in secret before the movement step happens. 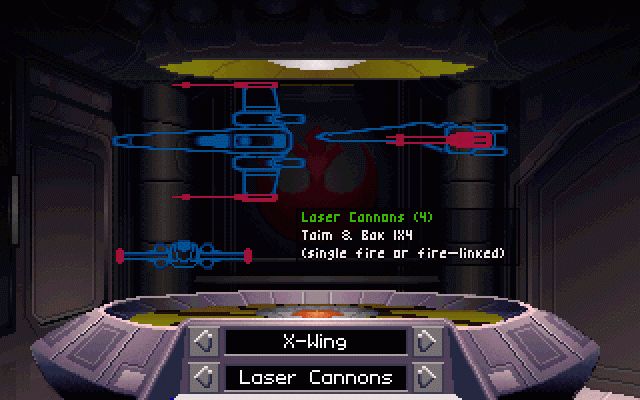 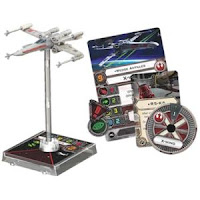 X-Wings in the game are your Rebel's main fighters so far, they have great attack value but are not as quick as tie-fighters. There shields and Droids make up the difference. Wedge is one of the best pilots they have and adding R2-D2 to him makes Wedge almost an unstoppable force to deal with. 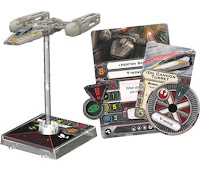 Y-wings are the work horse of the rebels, it is slow but can take quite a beating before it goes down. It only gets one defense dice though so it can go down quite quickly. The Y-Wing so far is the only ship that can house the Ion cannon one of the most frustrating weapons for the empire to deal with since it forces them to move strait and as slow as possible the next turn. 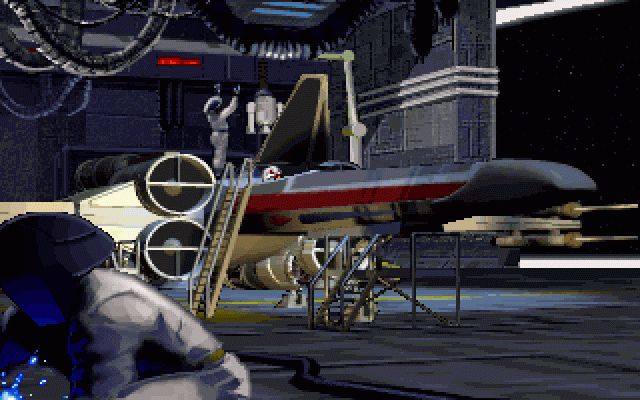 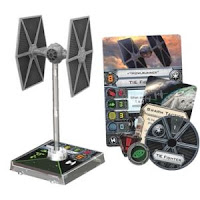 Ah the Tie-Fighter. These fast suckers have 3 defense dice but unlike there opposition they have no shields, so those defense dice are all that is keeping them alive. The Tie-fighters are cheep but they have more costly hero's that really add to the strength of the lesser tie-fighters a smart use of there hero pilots and the lesser fighters makes a really strong tie-fighter force. 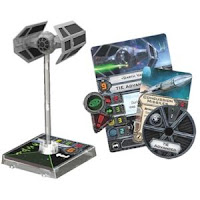 Last but not lest is the Tie fighter advanced these fighters are the only ship the Empire has so far with shields and apart form some bounty hunter ships they should be the only fighters that get shields. Darth Vader's ship is quite powerful, being that its an advanced and gets to use 2 abilities each turn makes him a force to recon with, but also target number one in all the games he is played in. Who doesn't want to say they shoot down Vader? 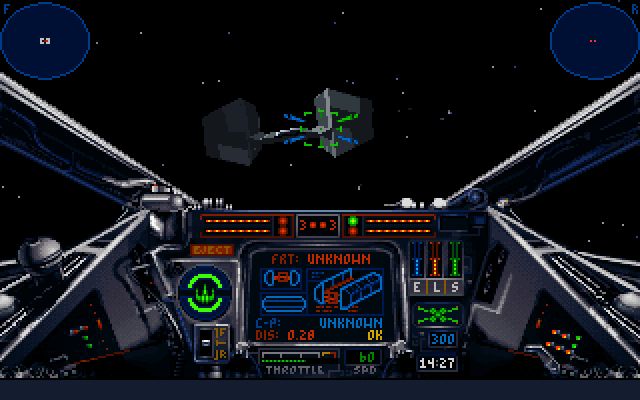 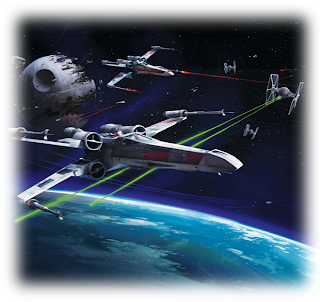 I really am liking the game, its a quick game depending on its size. I am in love with it at the 100 point scale. If you are looking for a new game and want something that is just ready to go this is a good choice for that. The game itself lands between the category of broad game and miniature game. I myself bought enough stuff so my friends could play with my stuff and we could just set down and play it like we would a broad game but the game also lends itself to customization and making set fleets and even tournament pay. Though the next thing i want to do is paint some of my w-wings from being yellow squadron to making them grey squadron, but that is another blog. =P

Hi all Andrew here, I lost my info on my last blog and, well... my focus as well. This will be a miniature blog only with battle reports and the things that I have painted. So as a first blog I thought I would go over the games that I am currently playing and show off some of my models from those games.

First off my main game, Flames of War. This game is the game closest to my heart and of all the games this is the one I will never give up on.

I have loads of armies for flames of war but my main armies are Romanian, Soviet, US and British. 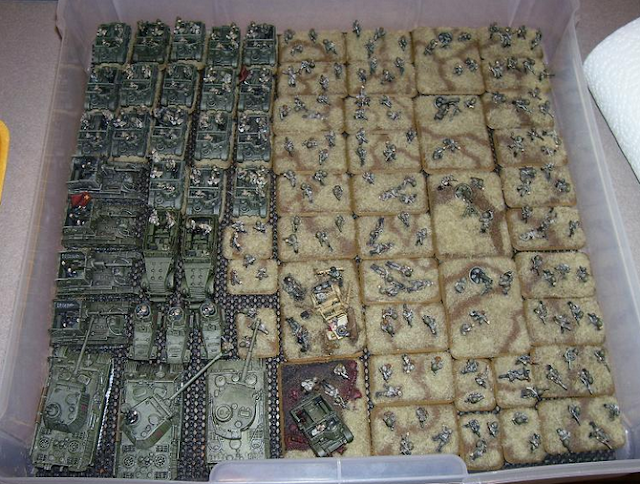 The next game my go 2 number two game is Malifaux, 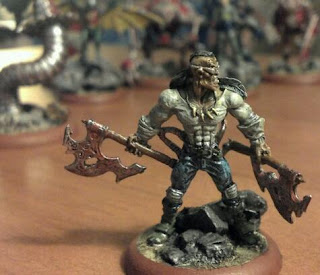 I just love this character driven game, I mainly play Rezers but I have allot of the other factions models save neverborn I don't really play them... at all. 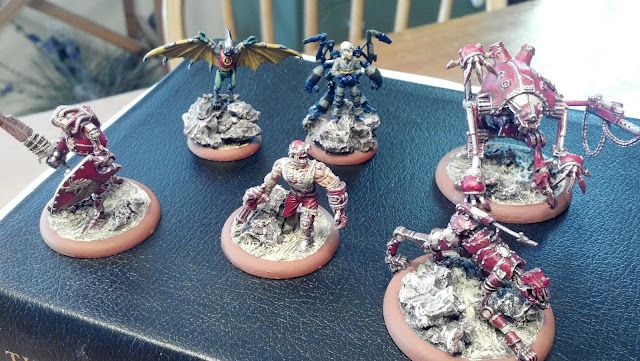 The next game I play is Warmachine, now I am not really a huge fan of the game. 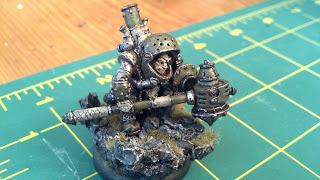 Its fun don't get me wrong its just geared towards power gamers and its all about movement and right combos. If you don't build your list just so then players who do will just crush you. Its not a game that produces gaming groups that are relaxed gamers who just want to have fun games, but more geared towards the hard core calculating gamers. I play the dwarfs since they are simple to understand and are limited models wise so its harder for me to get it wrong. Harder... But it is a game that I have a few friends who do play lighter games that i will game with and when i want to overclock my brain computing power i will try out a tournament . 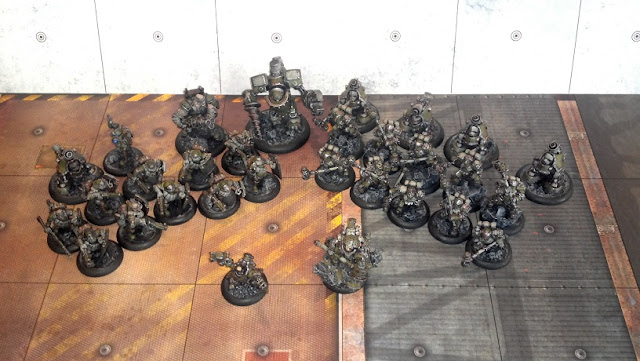 I also play wings of war (sorry don't have photos for that) and another really cool pre-painted miniature game X-Wing!. 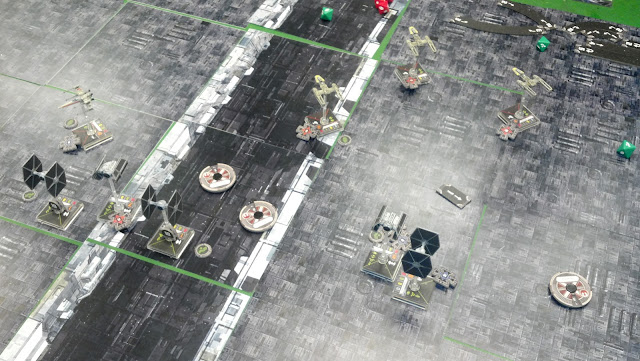 Both wings of war and W-wing are fighter games that are fun basic games though they play differently its easy to catalog them together. I am planning some repaints for both game so I will also post them here. 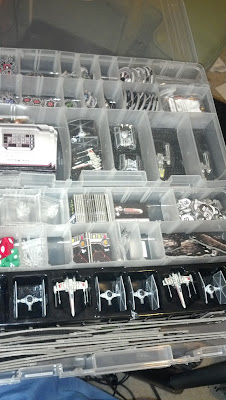 The newest game I got into is 40k. 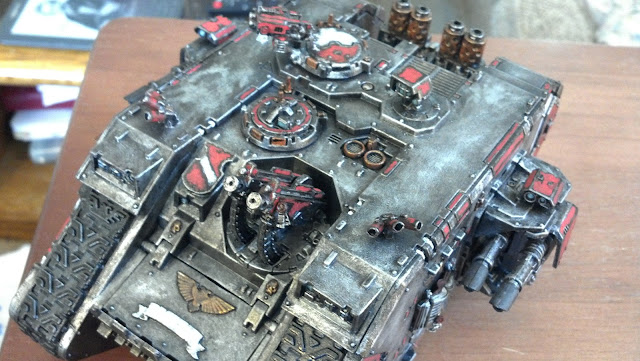 I swore I would never play it but my friends were all starting new armies and I saw that there was a space marine army that had helmets that didn't look like pigs and were in fact cool looking, since they looked like knights. It did not take long for me to figure out that I had one of the top tier lists in the game so I'm looking to get into a different army so my friends don't always have to face grey knights every game we play.

This being the newest game that I am playing I don't have much painted for it so expect more painting blogs about my knights in the weeks to come. 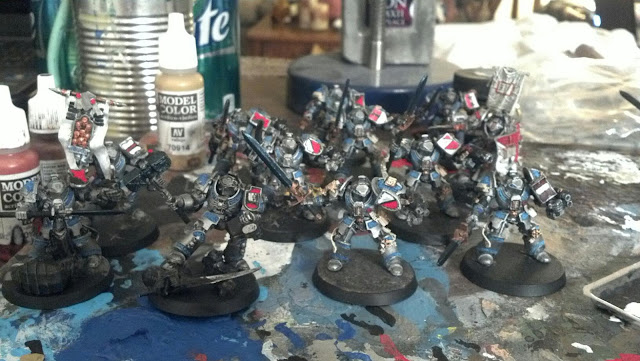 So yeah these are the main games I will talk about though there will be others and possibly board games I wanted to start off with the main games that I will be writing about in me blog.